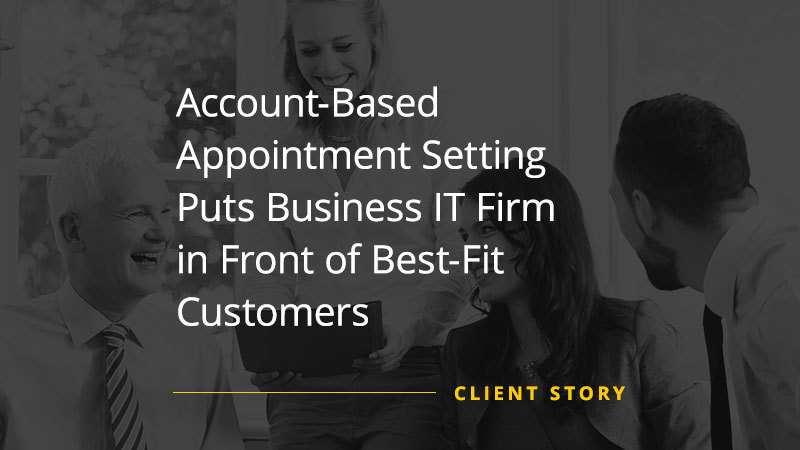 Managed IT, IT Consulting, Cloud Services

IT Manager, IT Director, CIO, CTO

The Client provides managed IT and IT consulting services to manufacturing, industrial, food and beverage, and media organizations throughout the United States. The company specializes in IT support, advisory, cloud, procurement, and networking solutions.

Since 2014, Callbox has been a key partner in the Client’s customer acquisition program. The Client outsources much of its prospecting activities to Callbox and receives the bulk of its outbound leads and appointments from Callbox campaigns carried out regularly throughout the year.

During the campaign for the second half of 2018, Callbox implemented an account-based appointment setting strategy. This was in support of the Client’s recent adoption of an ABM approach for acquiring new business.

With ABM, the Client aims to capture high-value deals by engaging multiple contacts in an organization. According to the Client, they’ve observed that IT buying decisions now have to pass through different layers of decision makers. Oftentimes this means reps need to speak to multiple roles within the target company just to get their foot in the door.

The Client wanted Callbox to help them initiate this process, so that their reps can focus on moving the sales conversation forward. As a result, Callbox’s role grew to include market research, account selection, account profiling, and targeted outreach.

Callbox and the Client worked out a detailed plan for a six-month account-based appointment setting campaign. The plan applied Callbox’s proven multi-touch, multi-channel outreach capabilities to connect with multiple relevant IT purchase stakeholders in the target accounts. The campaign consisted of three main activities:

The six-month campaign met all the key objectives set for each level of the project: individual channels, main activities, and overall campaign.

In terms of individual outreach channels used in the campaign, the Callbox team delivered the following results:

Since the qualified appointments represented best-fit, highly-interested opportunities, the Client expected to convert the bulk of these into new accounts, though they did not specify their forecast.

The Client continues to have Callbox as a marketing partner. Currently, Callbox is running a new six-month account-based appointment setting campaign for the Client