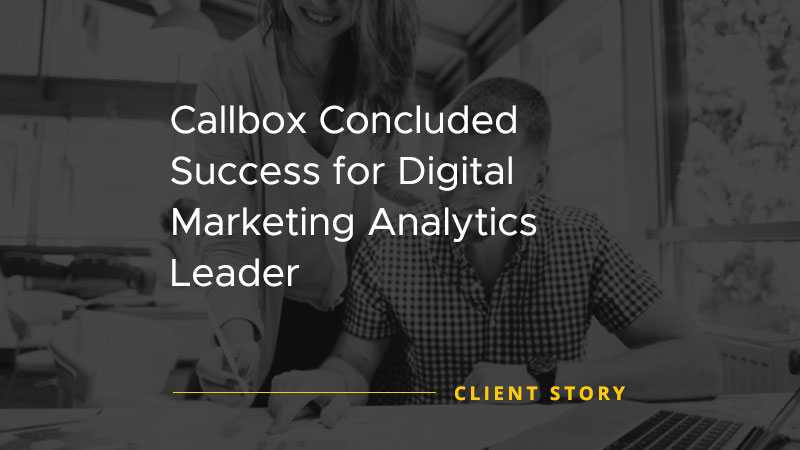 The Client is a leading digital marketing analytics (business intelligence) company that collects, filters, analyzes and aggregates data from social media, forums and other online locations.

Social media has become a way of life, thus getting people to sit down and talk about social media analytics may be a less interesting topic, but this group of millennial entrepreneurs whose minds are packed with fresh innovative ideas weren’t shaken and took the challenge. The target of 36 leads was quite high for a three-month project run with only two in-house staff to do all the marketing tasks, but the Client remained unruffled despite time constraints as outsourcing a lead generation provider was originally part of the marketing plan. The last thing that awaited resolution was “who” to employ.

The 1st week of the campaign saw the bulk of the initial touch points made by the Callbox reps as they set about establishing contact with the prospects, as evidenced by the number of email opens and contacts profiled.

As trust and a rapport began to build between Callbox and the prospects, 10 appointments were generated towards the end of the first 4 weeks, while 15 were generated between the 5th and 8th weeks, and more came in as the campaign progressed – 19 in between the 9th and 12th weeks.

1. Apart from calling to set appointments for the Client, Callbox also profiled the contact list through verification of information with the prospect himself.

2. During the calls, Callbox shared an overview of the social media analytics platform and helped the prospect identify his business needs via probing questions.

3. This allowed Callbox to gain the prospect’s trust on the Client’s behalf and generate interest in the Client’s products, and eventually, quality appointments.

2. Follow-up emails with information on the specific social media platform which the prospect is concerned with were sent after the agent has
spoken with the prospect.

3. Final emails were also sent to both prospects who wanted more information about the business intelligence platforms and those who agreed to a meeting.

1. The Pipeline Lead Nurture Tool was also used to profile the contact list. Based on the sendout results, Callbox was able to identify and filter active contacts from inactive ones.

3. Active responses by prospects like Opened Email, Clicked Link and Visited Website were tracked in real time and were set as follow-ups, and were profiled as to how the Callbox team would be able to reach them (call, email, mobile or social media).

The campaign ran for a total of 18 months. In the campaign’s first month alone (despite two weeks spent warming up and nurturing prospects), the Client received 55 qualified appointments, which was around 1.5 times what the company was able to generate from its six-month in-house prospecting activities.

This led the Client to request more calling agents from Callbox to be assigned to the campaign in the subsequent months. This, in turn, helped steadily increase the number of qualified appointments produced during the first few quarters of the campaign.