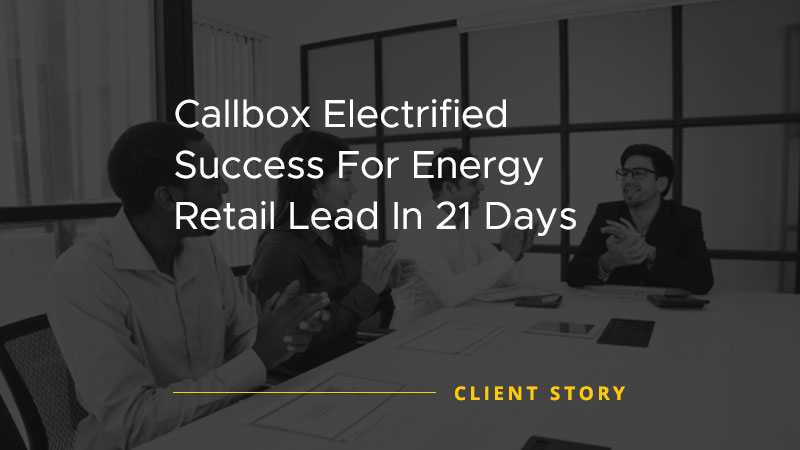 The Client is an electricity retailer who aims to empower consumer choice by providing options to better manage energy costs. Their extensive energy retail experience dates back to 1964.

With over 4 decades of electricity retail leadership both in their headquarters in Amsterdam and Singapore branch, the Client has built a strong business partnership with their clients – a relationship backed by trust and reliability inspiring them to create more electricity management options at the least cost.

Market competition is inevitable and the Client embraces this reality. So despite the strong business-client foundation they lean on, they decided to take advanced marketing steps that would keep them ahead in the game which included outsourcing to a seasoned and result-oriented multi-channel lead generation provider.

Alongside the Appointment Setting Program, Callbox ran Customer Profiling to update the Client’s database and at the same time build a new set of qualified contacts.

1. Two sets of initial email copies were sent separately: one for current customers that were due for record updating and another for new customers who might consider switching providers.

2. Active emails from prospects who responded, clicked links and visited the Client’s company website were saved for follow-up calls.

3. Bounces were also filtered and saved for follow-up calls for the agents to update as they speak with the prospect.

The Client ran an Appointment Setting Program not only to gain new customers but also to keep the current ones. The main goal was to offer new Value Plans and to share knowledge on easy steps to switch service.

1. With the help of the Pipeline Lead Nurture Tool, the team was able to profile and categorize prospects into two:
• Those interested to change or upgrade their service plans; and
• Those who preferred to keep their current service until contracts were due up but wanted to know more about the new packages

2. Appointments were set for both prospect types.

3. With Callbox’s SMART Calling system, the team was able to reach a good number of prospects to speak with the Client’s specialists with no appointments missed.

The first week was focused on updating contact details but with Callbox’s innovative tools and calling processes, the team was able to reach a good number of prospects and have set 6 appointments. At the end of the first month, a total of 22 appointments were set and 6 leads completed but expectations were exceeded when out of the 22 appointments, 2 were converted into sales.

As more contact details were updated in the second month, more active responses were received which resulted to 23 appointments and 8 leads.

In the third campaign month, 30 prospects showed high interest on the new price plan and have agreed to appointments while 8 considered to upgrade later.

The fourth month saw an all-time high with 34 appointments set and 12 leads completed.