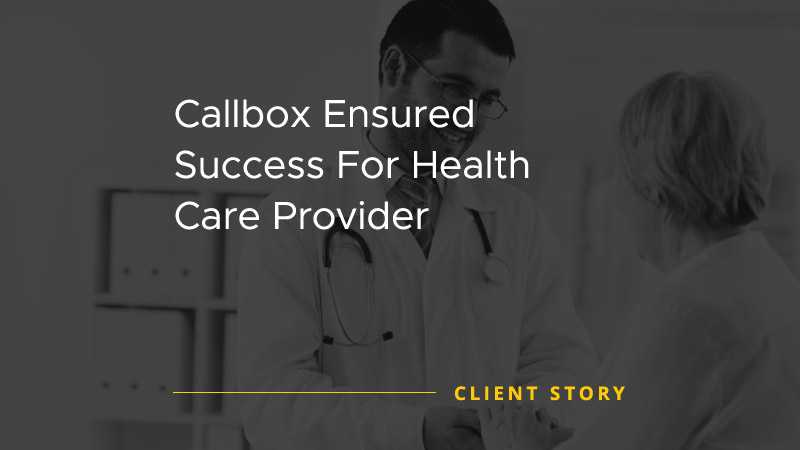 The Client is a one-size fits all health insurance provider who is driven by 3 guiding principles: technology, data and design that continues to serve SMEs and the non-employed sector.

Competition was tough so the Client opted to employ a lead generation company that has the expertise and tools needed to reach their targets – Callbox.

1. The Client, although a startup in the healthcare industry, did not hesitate to explore all marketing strategies that would help them achieve their goals. Callbox helped them build a robust database

2. With the use of the Pipeline Lead Nurture tool, the Callbox team sent initial copies of the Client’s unique healthcare products and services.

3. The copies contained an overview of the Client’s company information, downloadable PDFs of products and services, and a query box that redirects to the Client’s inbox, for them to be answered immediately.

4. The Callbox team on the other hand, tracked and saved active responses like opened emails, website visits, clicked links and queries for follow-up calls.

5. Invalid emails (bounces) and contact details were updated upon speaking with the prospect.

1. The Callbox team utilized its in-house SMART Calling system which helped the calling agents reach the right prospects at the time.

3. Prospects who were both looking for fair cost health insurance and those currently in contract with other providers but in search of better offers were qualified as candidates for appointments.

4. In order to ensure a solid appointment, Callbox agents sent a calendar invite along with a short but specific email containing information about the Client’s products and services that are probable answers to the prospect’s identified issues. .

The first week of calling stored up much qualified contacts as the Customer Profiling campaign progressed which generated 5 office appointments. The following second and third weeks consecutively generated 6 and 8 appointments and 10 in the fourth week (3 of which were phone appointments), bringing a total of 29 appointments for the first month.

Weeks five to eight met a slight decline in the number of appointments with 25 office meetings and 2 phone meetings, 27 in total for the second month.

The final term however recouped more than what was lost in the second term, closing the campaign with a total of 37 appointments (32 office and 5 phone meetings).