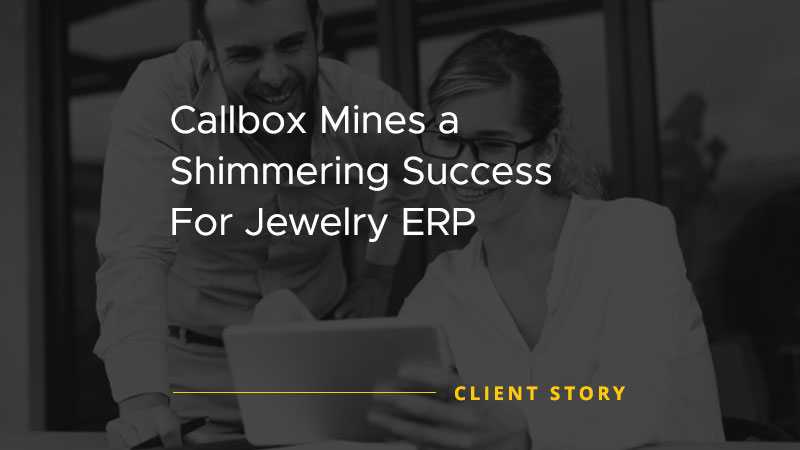 A B2B marketing specialist that fuses digital and calling strategies to drive revenue for clients worldwide through high-end marketing services.

The Client started providing technology and business solutions more than a couple of decades ago, and has acquired a weighty database of customers despite some challenges encountered. In 2014, the technology solutions leader launched an ERP software for jewelries that would provide reports that are useful in increasing business profitability. However, the target market was quite conservative – the kind who doesn’t easily believe and engage in software solutions for business advancement and prefer to do business the old way. That was one big challenge for the Client which urged them to outsource their lead generation campaign to Callbox.

1.Callbox validated the contact information in the database by sending initial emails with overview on the jewelry ERP software.

1. Active contacts were prioritized for calling.

2. Agents followed a careful process in the call flow: they had to speak in the clearest manner as target prospects were mostly seniors who are less interested with the new technology and must verify all contact information first before introducing the ERP software.

3. Prospects who agreed to speak with the Client were sent calendar invites to keep them reminded of the appointment schedule.

4. Prospects who were not ready to discuss yet were sent follow-up emails.

The initial campaign generated only 3 leads but the Client wasn’t surprised at all of the result as they knew that a jewelry software is all new to the target market. They considered the campaign as testing the market.

In 2016, the Client reconvened with the Callbox team to run another round of campaign despite the market’s indifference to the product. Callbox still maximized its multi-channel lead generation, utilizing the Pipeline Lead Nurture Tool using the same campaign process as of the initial campaign.The two-period campaign showed erratic trend results: Month 1 with 5 appointments, month 2 with 10, month 3 with 8.

The ups and downs of lead results was one carousel ride but the Client probed into the matter and concluded that the target market has become quite welcoming of the product now as compared to 2015. The two campaign periods generated a total of 40 appointments, an average of 20 appointments per campaign period, which is an improvement over the Client’s own campaign from previous years.

As the target market slowly accepted the fact that the jewelry ERP could have a place in their business, the Client again launched another campaign in 2017. The first month generated 18 appointments and the 2nd month concluded with 10.

A total of 85 leads were generated by the Callbox team for the jewelry ERP provider, 51 (60%) of which were converted into proposals, potential additional revenue for the Client valued at $612,000.00.