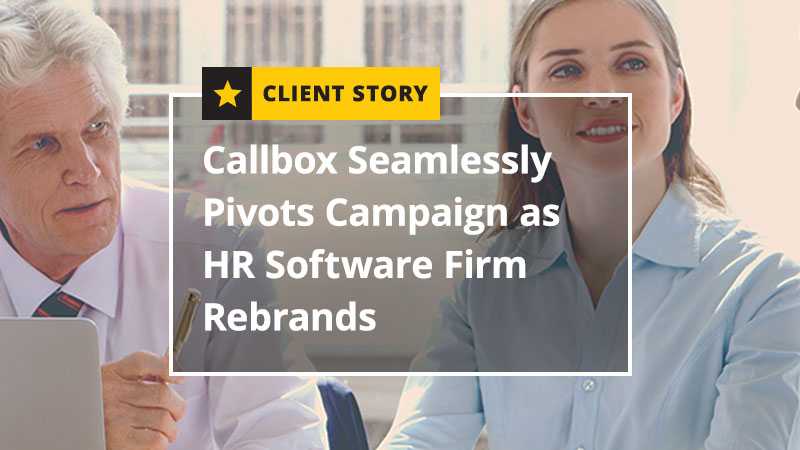 The Client is the Asia-Pacific arm of a UK-based business services and software company that offers cloud-enabled solutions for recruitment and talent acquisition. The company primarily sells to mid and large-sized US and UK businesses across different industries, and is looking to increase its presence in the APAC market after carrying out a recent business pivot.

With over 20 years’ experience providing award-winning recruitment software to the likes of Morgan Stanley, NBC Universal, and other high-profile customers, the Client recently underwent a major strategic pivot. The shift in focus sought to realign the Client’s various offerings in its US, UK, and APAC divisions under a single global identity.

As part of its new business direction, the company also unveiled a new suite of enhanced talent acquisition tools. This move aimed to further strengthen the Client’s position as a key technology partner for modern HR and recruitment teams.

To support its recent refocus and product rollout, the Client planned a series of marketing initiatives designed to:

The plan started out with Southeast Asia as its main priority. The company decided to look for a third-party agency that can help it quickly gain a foothold in all three markets

Callbox partnered with the Client and put together a campaign plan jointly with the company. The plan originally consisted of an event marketing phase and an appointment setting phase. The event marketing part of the campaign was intended to boost signups for the Client’s series of webinars scheduled for the second and third quarters.

But the company’s ongoing business pivot meant the campaign requirements could change at any time. Prior to the start of the event marketing phase, the Client decided to prioritize targeted opportunity generation through direct outreach instead of live events.

As a result, both Callbox and the Client agreed to replace event marketing with a thorough database profiling program for the campaign’s first stage. Without altering the campaign timeline or incurring delays, the Callbox team put together a revised campaign plan which the Client reviewed and approved well before the original starting date.

The two-part campaign has already completed the Database Profiling phase and is currently in the second month of the Appointment Setting stage. The profiling activities (which ran for one month) resulted in 565 contacts profiled and 147 potential accounts identified.

The campaign’s appointment setting leg has so far delivered 12 qualified appointments after one month of activities. Most of the appointments were generated near the end of the third week as the initial outreach and lead nurturing efforts done at the start of the program began converting.