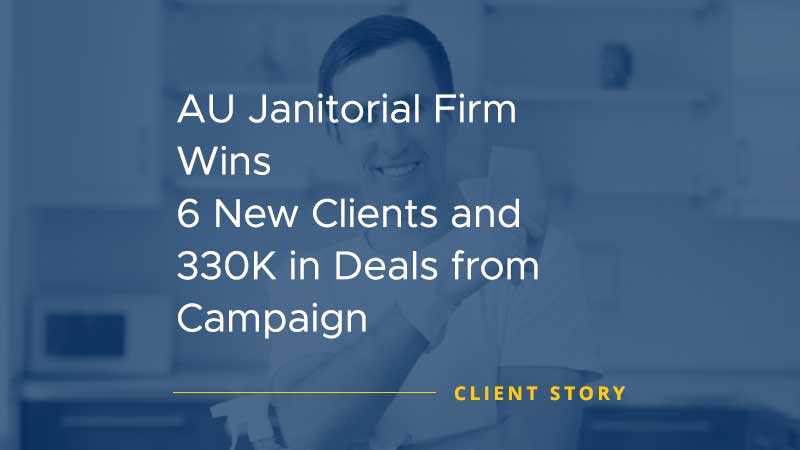 All industries except government schools and hospitals

Although Australia’s commercial cleaning sector is projected to grow at a healthy 5.0% each year until 2019, commercial cleaners continue to face fierce competition and strong downward price pressure, leading to falling sales and shrinking profit margins across the industry.

As a result, commercial cleaning providers like the Client now look to include more proactive marketing tactics in their customer acquisition programs. This is especially true for the Client which operates out of Melbourne, one of the areas in the country with the highest numbers of cleaning companies that are all vying for very similar target markets throughout Victoria and Australia.

In fact, the Client had already partnered with Callbox several years ago and completed a successful three-month outbound prospecting campaign that helped significantly expand its sales pipeline. But due to changes in marketing strategies, the Client thereafter prioritized inbound lead generation.

This time, the Client plans to reintroduce outbound prospecting into its marketing mix to supplement its inbound efforts. The company’s current prospecting program generates an average of 20 face-to-face appointments each month, and the Client aims to increase this by at least 25%.

Having already worked with Callbox, the Client chose to let Callbox plan and handle a new appointment setting campaign since Callbox has already demonstrated how it uses its capabilities to deliver solid results.

The Client then signed up for a three-month appointment setting program. The campaign plan included implementing a sales cadence using both email and phone touch points delivered at optimal times for engaging each contact.

The main goal was to book office appointments with qualified prospects for the Client’s reps to conduct a free cleaning estimate.

After three months of appointment setting activities, the campaign wrapped up with a total of 23 qualified appointments handed over to the Client.

Together with the client’s 20-appointment monthly average from inbound channels, the appointments generated in the campaign represent at least a 35% increase in the total number of appointments per month.

An even more important result is that, while the campaign was still ongoing, the Client was able to close six of the delivered appointments as new customers. At an average deal size of $55,000, this works out to $330,000 of additional revenues the Client gained from the campaign.

The Client was very pleased with the results that they’ve recently renewed the contract for a new three-month campaign.