I came across a Yahoo article headlined:“ Cassette Tapes Make Comeback After Big Stars Release Albums On Old Format”… were these ever been extinct?

10 years ago, Telemarketing was said to become extinct. But what went wrong? Telemarketing is still one of the most pursued and executed B2B prospecting strategies most specially by giant industries like IT and Software.

Entrepreneur magazine’s article in 2007 titled “10 Businesses Facing Extinction in 10 Years” talked about the industries that were likely to get extinct 10 years after. Telemarketing was included but stood out among others listed.

Below are 5 of the 10 industries mentioned; see what has taken over them:

Online /digital music sites like Spotify, eMusic and AllMusic offer free music downloads and are very accessible via different gadgets. Record players like CD’s and Cassettes were no longer sold and instead became music memorabilias of the previous decades, if so, just a few.

Digital photography has taken its toll on camera film. Saving and publishing are now done via data transfer, while dark rooms turned into print out booths in photo studios and malls.

Daily print out and distribution have greatly decreased in the 1990’s as media outlets revolutionized journalism and broadcasting through the internet.

Telcos nowadays come with very enticing mobile and internet bundles – so who else needs to run to a pay phone booth when communication is just a chat or mobile call away?

As mentioned earlier, telemarketing is included in the list but projects quite a different image.

Many people dread cold calls from sales reps who bug them on the phone day or night, and the pronouncement of telemarketing extinction was good news to them.

Following Australia’s ACMA, SIngapore launched PDPC (Personal Data Protection Commission)  in 2013, a government statutory body to administer and enforce the Personal Data Protection Act 2012, to help organisations understand and comply with the PDPA,as well as to promote greater awareness of the importance of personal data protection in the country.

The act gave consumers and organizations the option to enlist their names in the Do Not Call and Do Not Email registry to avoid unsolicited communications like calls and emails.

And as of December 2015, total consumer registrants were 854,376 and organizations account created were 5,984.

The DNC and DNE listing was thought to expedite the extinction of telemarketing but resulted otherwise – it made telemarketing providers become smarter and more precautious in managing their outbound communications.

In fact, an industry survey on personal data protection showed that more than 80% of telemarketing organizations were aware of the obligation to check the DNC registry.

These providers utilize innovative technology on email scrubbing and number filtering in their data warehouses to ensure data integrity.

The DNC / DNE regulations even enhanced telemarketing organizations’ creative minds to continuously uncover thought processes and innovative technologies to ease workflow through multiple channels, seem to be scrubbing out the word extinct from the story.

Industry behemoths like IT and Software gear towards the proven effective technology and processes of Telemarketing in scaling up their business growth, thus making Telemarketing  evolve and reinvent itself over time by giving it a pivotal space in their marketing strategy landscape.

Here’s one article that shows the benefits of telemarketing to ISP providers in Australia.

And that’s no difference to big time artists who started releasing new albums on cassette tapes recently, thus replaying its melodic significance in the music industry.

Check out these successful telemarketing campaign:

Featured: The Parts of the Best Events Telemarketing Script in Singapore 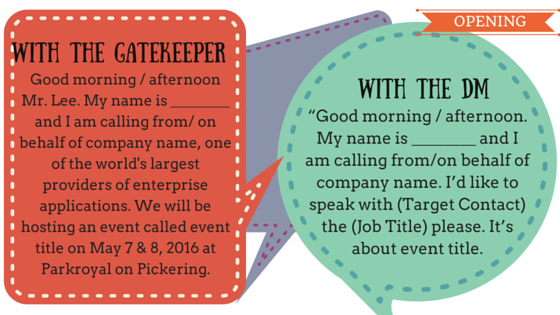 Interested to avail proven and tested telemarketing service in Singapore?

The ‘PERFECT’ Time to Call a Prospect