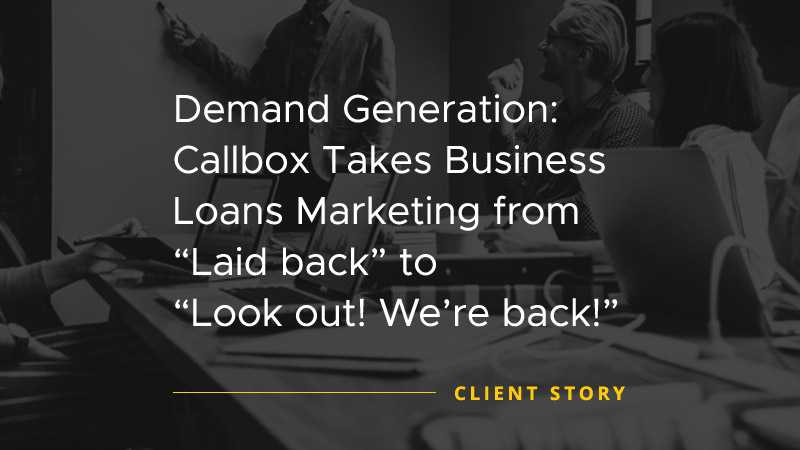 Demand Generation: Callbox Takes Business Loans Marketing from “Laid back” to “Look out! We’re back!”

The Client is a financial company that offers unsecured business loans to small and medium businesses in North South Wales, Australia. They grant loans to businesses for varied purposes ranging from site renovation, marketing and advertising to vendor-financing. The fast loan approval of 2-3 working days and custom packages they offer have become popular and have earned them client referrals.

The Client enjoyed dominion in the financial loans business in NSW for years, carrying with them the legacy of the mother company who cradled almost all financial needs of most of the SMEs in the state before it gave up all its business rights to the Client in 2005.

The Client kept its good business reputation among customers which enabled them to sustain a good number of customers in their database until competitors grew and mushroomed in the market, offering similar financing options which threatened to kill much of their business. This has impacted customer acquisition and even account maintenance which urged the Client to reconsider their usual laid back marketing style of waiting for customers to ring their phones or knock at the office door. They needed a more proactive strategy that would address the following issues:

Callbox designed a unique Demand Generation program for the client. The process was structured in such a way that it would get the word out on the Client’s business loan offerings and create a buzz and qualified interest among its target customers by:

The Client ultimately wanted to create a master list of target prospects that they can use in any of their upcoming internal marketing campaigns. With a more aggressive marketing approach in mind, the Client knew that they needed to be armed with a qualified list of potential customers that they could tap if they wanted to beat out the competition.

The Callbox team and the Client discussed the campaign goals and requirements in the Kick-Off Meeting which was followed by Callbox’s preparation of list of target decision makers. At the same time, the Callbox Pipeline and the Automated Nurture Scheme were set-up while the email copies, landing page and call script were designed and approved by the Client and went through tests. Product training and call simulation concluded the preliminary actions.

Filtering the Most Qualified Customers

With the use of the Callbox Pipeline’s Lead Nurture Tool, Initial or Introductory emails were sent out to the target list which aimed to hit two birds at the same time – validate email address and present the offer. The nurture tool is able to track real-time actions so Opened Emails, Web Visits and Social Media Connections were easily monitored by the Callbox team. Prospects who replied via the said actions were called by the agent to qualify if these prospects have genuine interest.

Prospects that were called and were identified to have genuine need and interest were profiled and tagged as Lead Completed in the Pipeline for the Client to promptly handle.

Other prospects who did reply but were gauged to have minimal interest, just wanted to know more information, or are just looking for options for future reference were still profiled by updating and verifying all contact information specially email addresses, as follow-up email copies were sent in drip manner as part of the nurture process to keep in constant contact with the prospect.

The Client never lost track of any positive contacts as the Lead Nurture Tool generated and sent real-time alerts and updates via the the Client’s Callbox Pipeline account and email.

Out of the 4500 list of targets emailed, 540 (12%) responded and were classified as qualified prospects with genuine interest, which is a 50% increase from their laid back strategy. These were prospects who either replied via email, connected through social media, or visited the website and submitted a query form that specifically stated their purpose for wanting to avail a loan. This database of positive respondents, located across a much wider geographical area and profiled by Callbox with a list score of 78%, represented the initial group of people they can actively market their loans to. The Client could now proceed with their promotional efforts with confidence, knowing that they will be talking to people who have expressed varying levels of interest in their product.

Callbox’s Demand Generation campaign proved to be the much needed jump start to the Client’s sputtering business – it increased awareness and interest among target contacts, broadened the target area, and generated a well-profiled, phone-verified and updated contact list of prospects, enabling them to work their way back into great sales numbers.
The Client recently signed up for another Demand Generation campaign with Callbox.