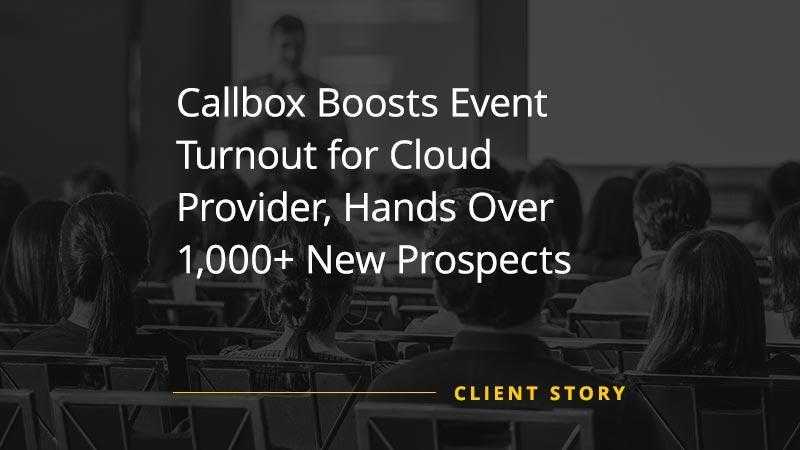 The Client also develops other subscription-based solutions for meeting businesses’ needs throughout the customer life cycle, as well as provides a full suite of development integration services.

Founded in 1999, the Client now remains the clear leader in the CRM space with a 20% market share. As of 2017, The Client has around 30,100 employees across its global offices and annual revenues of more than $8.4 billion

As a leading brand in the CRM market, the Client regularly organizes and hosts in-person events throughout different parts of the world. These tradeshows and conferences, including its annual flagship event, typically draw huge numbers of attendees and receive extensive media coverage.

For its Asia-Pacific calendar, the company had a series of live events lined up for 2017. These events—which were scheduled for January, April, and July—would showcase the Client’s insights on how top-performing marketers succeed with customer-centric strategies driven by digital tools.

The Client planned to host each of the events in both Singapore and Hong Kong, targeting CMOs, marketing directors, sales directors, marketing managers, and other persons in charge of marketing and sales at organizations based in the two cities. The three events included separate programs for SMB and mid-market/general business (MMGB) audiences.

The company partnered with Callbox after being introduced by one of Callbox’s long-time clients in the software space. The Client intended to add targeted, one-on-one outreach into the event promotion mix, and wanted to see how Callbox’s Call-to-Invite package would be able to help boost registrations for its January event.

The initial campaign’s results met the company’s expectations, and The Client decided to work with Callbox for the April and July live events.

A Call-to-Invite campaign was planned for each of the three events. The three campaigns combined email outreach and live phone conversations to engage attendees and prospects throughout the event cycle.

STEP 1. LAYING DOWN THE GROUNDWORK

Prior to the start of each campaign, callbox closely worked with the Client to thoroughly prepare for the Call-to-Invite activities:

The pre-event outreach cadence started one month prior to each scheduled conference. The Callbox team segmented potential attendees according to location (Singapore or Hong Kong), business size (SMB or MMGB), and target industry.

STEP 3. FOLLOWING UP AFTER THE EVENT

To maximize conversions, Callbox executed a post-event follow-up cadence after each conference.

In addition, the three campaigns also generated 1,050 new prospects for the Client. This consisted of 394 follow-ups and 656 requests for information.

The Client was very pleased with the results of the three Call-to-Invite campaigns. The first campaign exceeded their expectations that they increased the number of calling seats for the March-April and June-July campaigns. The company has also decided to continue partnering with Callbox for its upcoming Asia-Pacific events.